Over the past few weeks, the coronavirus has turned the country’s cultural spigot off, with sports suspended, museums closed and movies postponed.

But the virus hasn’t stopped Bob Dylan, who, on the evening of March 26, released “Murder Most Foul,” a 17-minute long song about the Kennedy assassination.

Many have pondered the timing. So have I. I’m a Kennedy scholar writing a book about how television handled coverage of the Kennedy assassination over a traumatic four-day “black weekend,” as it was called. I’ve also explored how Americans responded to the sudden upending of national life with the murder of a popular and uniquely telegenic president. 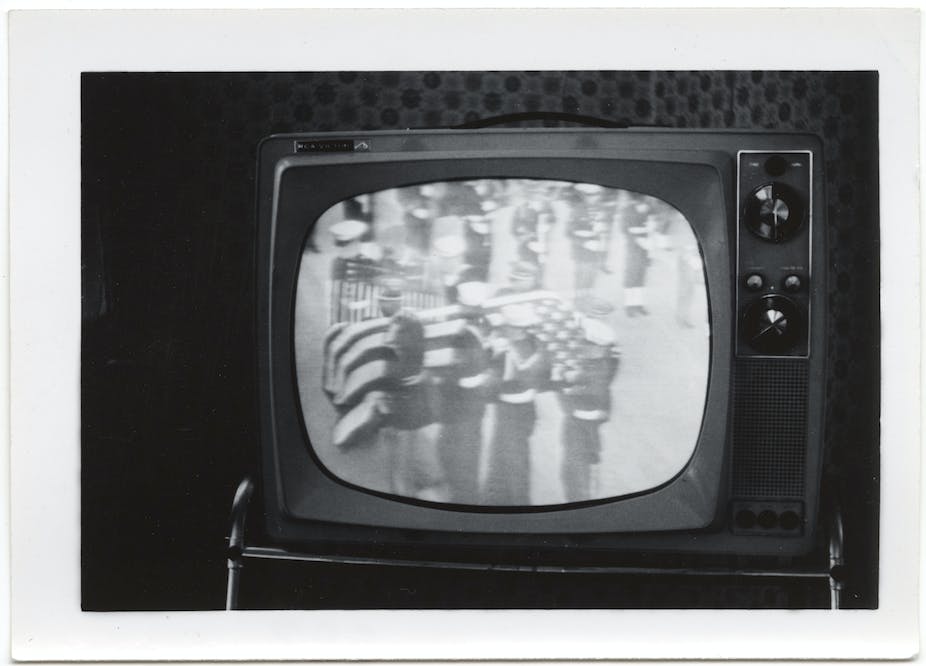 Then – as now – Americans found themselves transfixed by the news. International Center of Photography

NBC News anchor David Brinkley, as he signed off that first night, called Kennedy’s death “just too much, too ugly and too fast.” The coronavirus crisis may also seem too much and too ugly, though it’s unfolded much more slowly. While a global pandemic is certainly different from a political assassination, I wonder if Dylan sensed some resonance between the two events.

Inscrutable as always, he’s unlikely to ever explain. And yet it’s hard to ignore the poignant similarities in the ways Americans have responded to each tragedy.

As Americans hunker down in their homes during the current crisis, they might assume that, during other crises, people took solace in gathering with others in shared public space.

But that didn’t really happen after Kennedy’s assassination. Most businesses and schools abruptly closed early Friday afternoon following news of the noontime shooting in Dallas. Monday was declared a day of mourning, with Kennedy’s state funeral in Washington. There wasn’t anything for most Americans to do over that long weekend.

So what did they do? They sat at home and watched nonstop television coverage. Over 90% of Americans parked themselves in front of their television sets for an average of eight to 10 hours a day, according to A.C. Nielsen statistics; one-sixth of households had their television sets on for even longer. Social scientists noted that television accommodated people who needed to grapple with the trauma alone, as well as those who wanted to be with family and friends.

Glued to the news

What did viewers get from their voluminous viewing? Besides occasional actual news, they mostly found comfort. Over and over, in the hundreds of letters sent to NBC in the wake of the assassination coverage, viewers described how emotionally connected they felt to the newsmen, whom they saw as companions in mourning.

“During this time of personal loss,” wrote one Lubbock, Texas man to NBC anchor Chet Huntley, “I have come to you as an old friend looking for answers to questions, explanations, and even consolation. I have not been disappointed.” 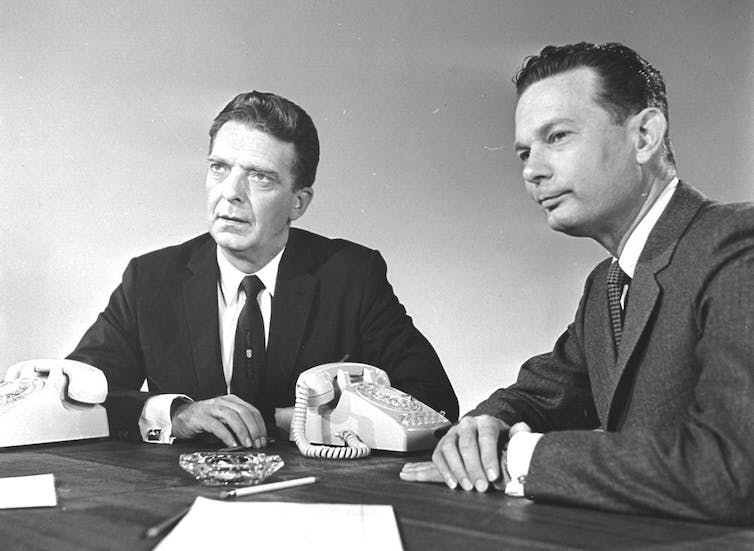 TV viewers today might not describe network anchors as “friendly neighbors who drop in to chat and discuss events in our fast changing world” – as a California letter writer did on Nov. 24, 1963 – but in recent weeks, they’ve turned to NBC, CBS and ABC nightly news in record numbers. According to The New York Times, amid the uncertainty of the moment, traditional nightly network news shows – not the 24/7 cable news – seem to be providing comfort. The paper quotes NBC anchor, Lester Holt, who compared the network nightly news to comfort food – “a broadcast that you remember growing up with as a kid that your parents watched.”

After JFK’s assassination, Americans spent their long days indoors in some of the same ways their contemporaries are doing today, like by baking bread.

In 1963, a woman who described herself as “just a Kansas City housewife” wrote to David Brinkley and Chet Huntley about her inability to tear herself away from the TV to go grocery shopping. So she ended up simply baking her own bread: “I took the task of baking rye bread rather than going out to the store, as I was in need of bread, but I really didn’t want to get out of the house.”

Others felt overwhelmed by the constant stream of news and updates.

“I walked around the block because I felt if I didn’t I was going to scream,” one Minneapolis man told two communication scholars. “I thought I could get away from it for awhile, but [the TV] was like a magnet.”

Americans in 1963 also used television to do what people today have been doing with Zoom: participate virtually, from afar. Ninety-six percent of Americans watched the networks’ ceremonial coverage of Kennedy’s state funeral, and letter writers marveled at their sense of “being there.”

“I, from my home in Cincinnati, was permitted to be there by way of television,” one high school student wrote to David Brinkley. “I was present at the scene of his death. I walked to the cathedral with Mrs. Kennedy and the famous dignitaries.”

In the weeks after the assassination, social scientists confidently asserted that the country would bounce back to stability and quick social recovery. Wilbur Schramm, one of the founders of the field of communication studies, declared, “This crisis was integrative rather than disintegrative.”

They were wrong, of course.

The “nightmare on Elm Street,” as Dylan calls the assassination – after the name of the street where Kennedy was shot – continues to haunt many baby boomers. Oliver Stone’s 1991 movie “JFK” and Stephen King’s 2011 novel “11/22/63” both portray it as a pivot point that spurred national disaster, decline and unfulfilled dreams.

It’s impossible to know the social, cultural and political legacy of our current crisis. Some officials, including the current occupant of the White House, suggest we’ll bounce back stronger than ever. Things, they say, will go back to normal – whatever that means in these already turbulent times.

But Dylan’s evocation of the Kennedy assassination at this moment suggests something more ominous. In the middle of the song, he declares:

Aniko Bodroghkozy, Professor of Media Studies, University of Virginia. This article is republished from The Conversation under a Creative Commons license. Read the original article.