Cover: Waitress Casey Stewart works at two restaurants, at least one which may have to close for at least a week or more. AP Photo/Kathy Willens

Economic activity is slowing rapidly, both in the United States and around the world.

Social distancing, stalling global trade, widespread illness and the closing of borders, restaurants and schools will all contribute to the next Great Recession.

Early estimates suggest that between 14 million and 37 million jobs could be lost during the initial spread of COVID-19. Even the low-end estimates are five times larger than the job losses the U.S. experienced in the first few months of the Great Recession that lasted from 2007 to 2009.

Since nearly 6.6 million jobs were lost in just one week at the end of March, the odds are that unemployment will be very, very high, perhaps as high as the 25% range of Great Depression of the 1930s.

As scholars of communications, labor economics, inequality and equity, we know that recessions generally hit insecure families hardest. That will be true this time as well.

Because they risk exposure to COVID-19 or face unemployment because of it, workers receiving the lowest hourly wages are more likely to lack the financial resources, health care and sick leave to deal with the crisis. 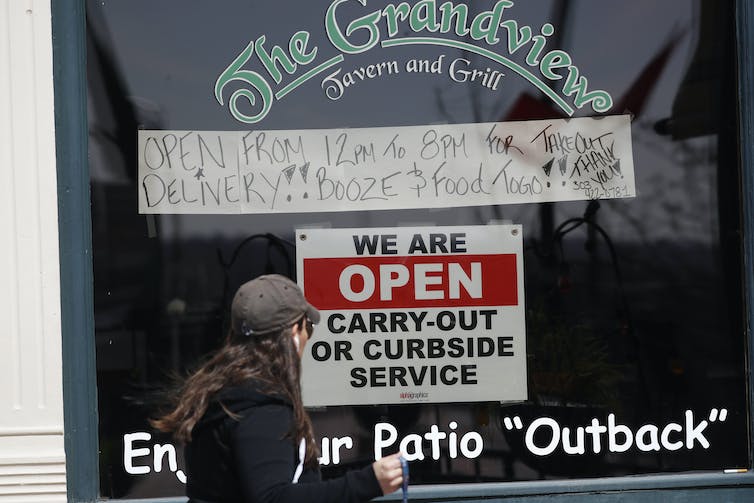 Restaurants, bars and other venues keep parts of their services going while closing others. AP Photo/David Zalubowski

The risks to service workers

Almost 80% of all U.S. private sector employment is in the service sector, totaling some 129 million jobs. The coronavirus pandemic poses a unique threat, both of eliminating jobs and putting workers at risk of infection.

These workers are among the least equipped to deal with these risks. About 69% of service workers are low-wage, meaning they make less than $15 an hour, as shown in our research.

Some 58% do not have paid sick leave, 61% have no or inadequate health insurance and very few have paid family leave to care for the sick and dying.

Our analysis pinpoints the states, industries and demographic groups where these low-wage workers are most likely to be found, and provides recommendations for better assisting those most at risk.

Most U.S. service and retail employers pay low wages. As is well known, the U.S. has the highest inequality among high income countries, meaning there is the broadest gap between the salaries of the best and worst paid workers.

Our report estimates that 57% of nursing home workers, 69% of grocery store workers and 74% of cleaning employees are low-wage workers.

These types of service workers are less likely to lose their jobs, having been deemed essential during the crisis – but they risk exposure to the virus. A recent New York Times report cites cashiers, janitors, messengers and food service employees as among the most at-risk workers based on their exposure to possible carriers of the virus.

Women and people of color hold a disproportionate share of service industry jobs, and will likely bear the brunt of the economic recession as a result.

Women hold 60% of all service jobs in the U.S. Among these female service workers, 70% earn less than $15 an hour. Broken down by race, 69% of white, 71% of black and 76% of Latina women workers are paid wages below the living wage threshold of $15 per hour.

The high proportion of women in low-pay, high-risk industries such as house cleaning, nursing and store retail further increases their economic and health vulnerability.

The majority of service workers in every state — with the lone exception of Hawaii — earn less than $15 per hour. Arkansas has the highest percentage of low-wage service workers in the U.S. at 77.6%, a figure that rises to 81.4% among women.

States like Arkansas, Mississippi, Idaho, New Mexico and South Carolina that have the highest percentage of low-wage workers will likely fare the worst in the coming economic recession.

Among these, the citizens of Mississippi and South Carolina, both of which rejected the extension of Medicaid under Obamacare to their working poor, will likely fare even worse.

States with higher urban density and costs of living are also at increased risk. In New York, California and Washington, currently the states hardest hit by the pandemic, more than 57% of service workers make less than $15 an hour, but have to pay more than the national average for rent, food and housing.

The U.S. is the richest country in the world, yet 40% of its jobs pay poverty-level wages. Paying low wages and low or no health benefits is business as usual for many firms, particularly in retail, service, warehousing and agriculture.

The COVID-19 pandemic – and its economic consequences – presents the U.S. with an opportunity to reject our low-wage labor market structure and transition to an economy similar to that of other high-income countries, one characterized by jobs that deliver living wages and a society that insures universal health care and job security in the face of illness, such as Denmark.

The new federal economic stimulus legislation contains useful short-term reactions to this enormous crisis. It expands access to unemployment benefits and sends money to households, but does little to keep workers on the job. There are already widespread reports of employers putting profits over the welfare of their employees.

Importantly, there are also some hopeful signs that service workers are demanding and gaining additional pay and benefits even during the COVID-19 pandemic.

We believe Denmark’s recent measures to combat the crisis, which include paying 75% of employees salaries, along with proposals championed by Sens. Bernie Sanders and Elizabeth Warren are closer to what the country needs in the longer run: high minimum wages, universal health care and a strengthened labor movement.