For millions of football fans, we’ve had nothing but repeats to watch to get our fix in recent months. But starting from May 16, elite European football kicks off, courtesy of the German Bundesliga. But there will be a few differences.

Given that there will be a packed schedule of matches to finish before the end of July, teams can make five substitutions rather than the normal three. But the most obvious difference will be that these matches will take place without spectators. Games will be held in empty, cavernous stadiums. These will not be neutral venues, as has been proposed for completing the English Premier League, but research shows empty grounds can effectively mean a removal of “home” advantage.

A few studies show that home fans can influence the outcome of football matches through the pressure they put on the referee. There is evidence, for example, that referees award more injury time when the home team is losing and less when the home team is winning, systematically shortening or lengthening the game to favour the home team, and this is affected by how many fans are present. 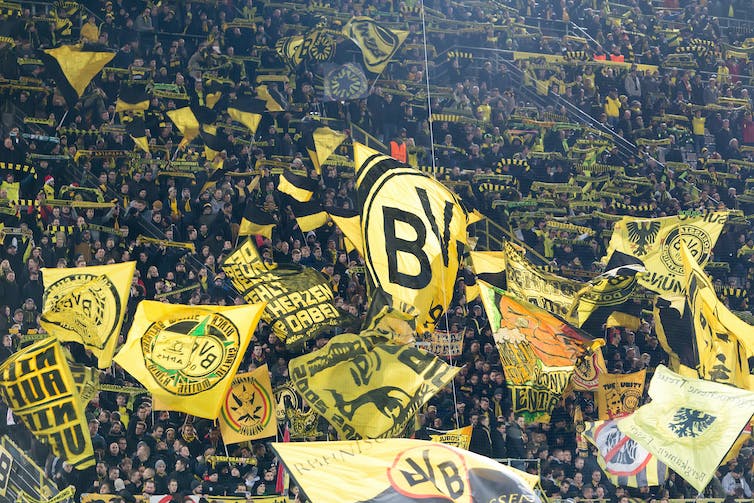 Most results on the effects of fans are based on changes in a few hundred or thousand fans from one match to the next. We are among a few sports economists to have studied the effect of playing in closed stadiums.

Historically, most closed doors matches have been imposed on clubs and their fans as a punishment – for violence, racist abuse and corruption. Studying the history of European football since the second world war, we found 191 closed doors matches across the top Italian and French leagues, and in European club competitions. We found none in the English and German top leagues, and only one in Spain’s La Liga. Most of these matches were after 2002. 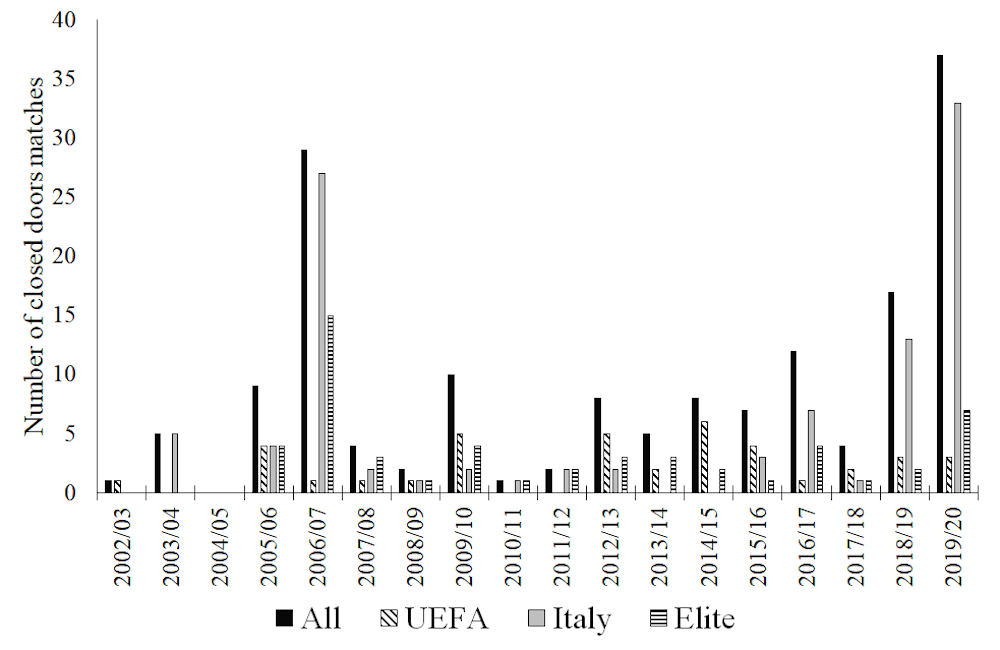 The number of closed door matches in European football by competition and season since 2002/03. Carl Singleton, Author provided

We have found that the considerable home advantage in football is on average almost entirely wiped out in closed doors matches. Historically, home teams win 46% of the time in matches with fans, but only 36% of the time when there are no fans. The away team wins 26% of the time with fans, and 34% without fans.

These differences are primarily because the home team scores fewer goals when there aren’t any fans. The chart below shows the average differences between matches with fans and without them since 2002, with negative values implying that an outcome was smaller or happened less often in closed doors matches, and vice versa for a positive value. 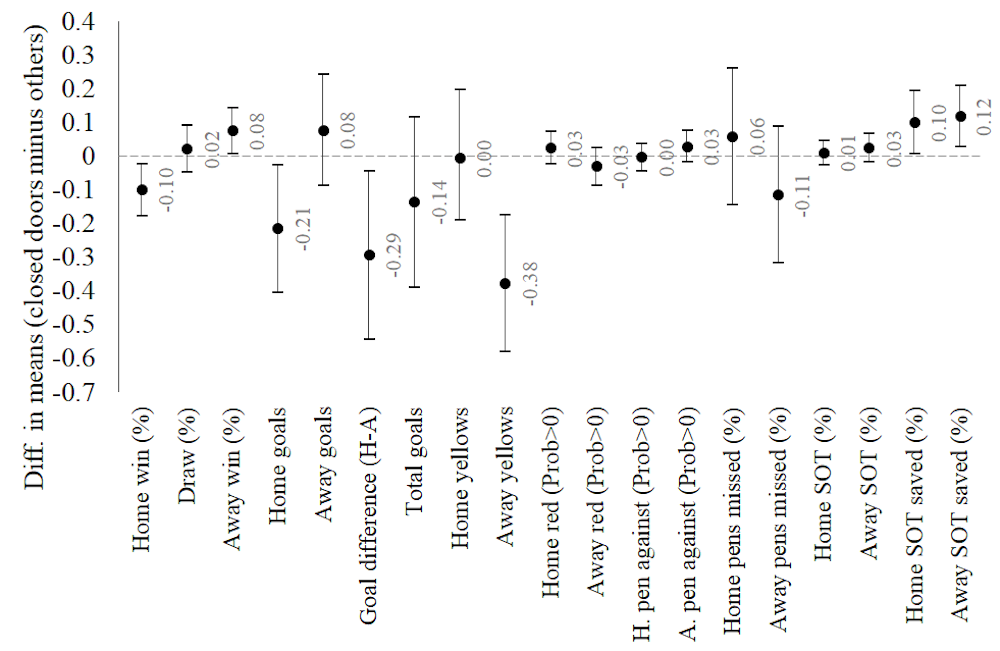 The outcomes in closed doors matches vs in all others since the beginning of the 2002-03 European football season. Bands show 95% confidence intervals. Carl Singleton, Author provided

Reasons for the difference

The data suggests at least two reasons for the loss of home advantage. The first is that away teams get punished differently by the referee. Small changes in the number of fans in the stadium normally have small effects. But as the graph below shows, we estimate that an away team would receive 0.5 fewer yellow cards when playing behind closed doors (the X on the diagram), whereas the effect of reducing a specific stadium’s 25,000 crowd down to a 6,000 one is a mere 0.05 of a card (black line on diagram). Closed door matches have a disproportionate and strong effect on yellow cards. 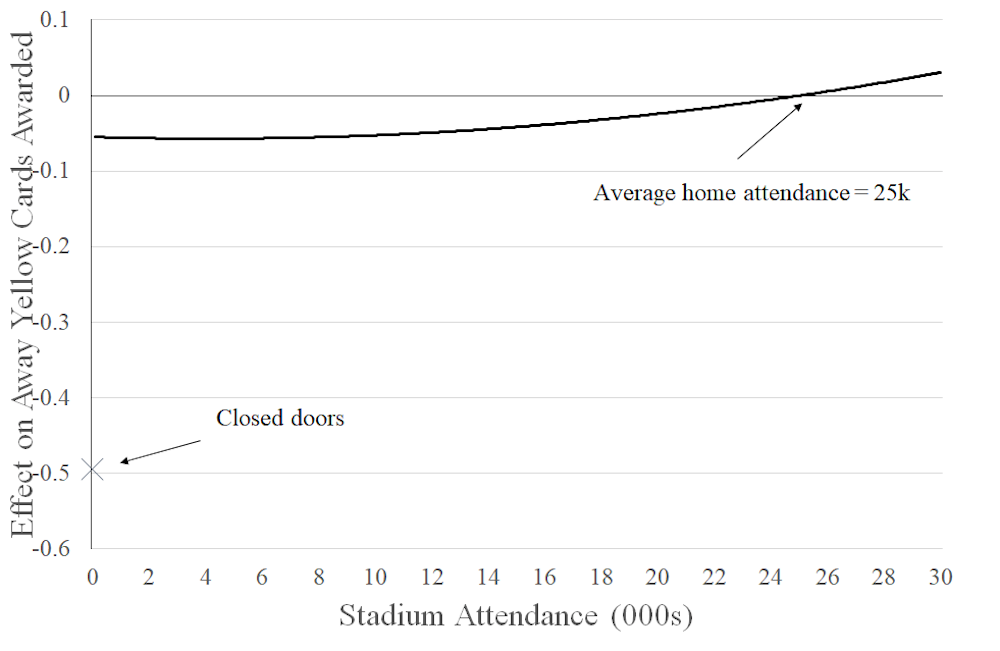 The estimated effects on how many yellow cards are awarded to the away team, depending on how many fans are present. Carl Singleton, Author provided

The second possible reason is that less injury time is awarded in matches played behind closed doors. Though, in the small sample of matches without fans we have studied so far, this difference is generally not statistically significant. 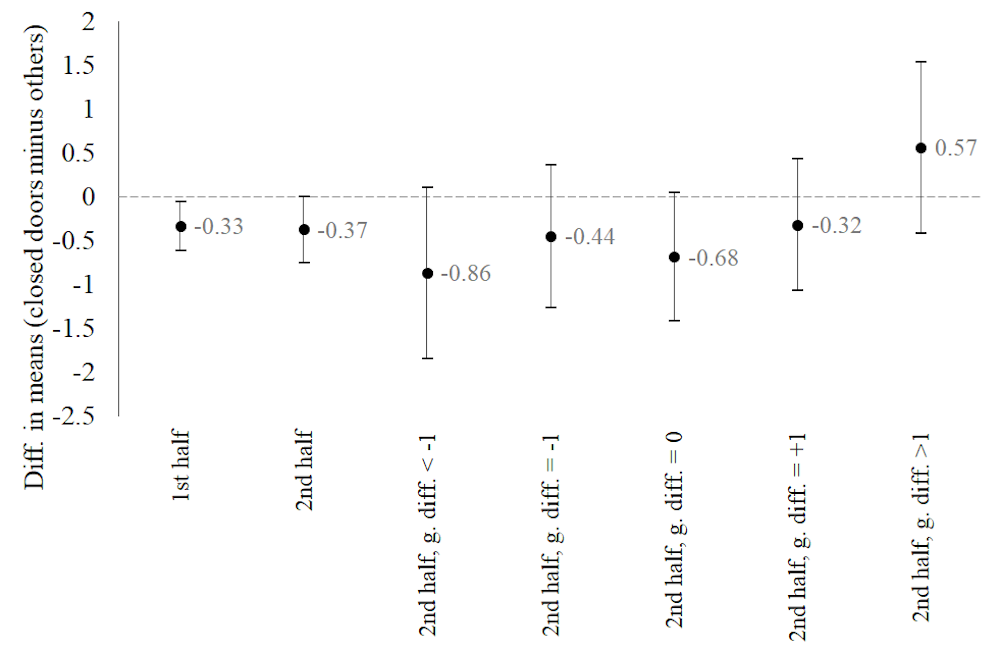 Second half injury time awarded in closed doors matches vs in all others since the beginning of the 2002-03 European football season. Bands show 95% confidence intervals. Carl Singleton, Author provided

To be clear, we are not accusing professional football referees of being consciously biased. Indeed research has shown that some of the biases they exhibit are subconscious, reflecting the highly pressurised environment that they must make tight calls in. Hence, the introduction of technology like the infamous VAR is an attempt to make the game more fair.

Fans turn up hoping to see their team win, and so, whatever causes it, there is an argument that some amount of home advantage is a good thing. It draws higher crowds and maintains their interest – only the diehards pay to watch their team lose every week.

Ultimately, our research suggests that professional football over the coming months is likely to be substantially different – not just the echoes of empty stadiums but in measurable outcomes as well. We can expect home teams to win less often. Teams with more home matches than away matches remaining in the current season might not do as well as they otherwise would have done, affecting championships, promotion and relegation.