Plus, here’s how much the White House is worth.

Good morning, and happy Veterans Day, a special holiday that celebrates all US military veterans. If you're a veteran we want to thank you directly. At some point in your life, you sacrificed something for our country. That might have been years of your life. That might have been meals away from your family or lonely moments abroad. We're here to tell you none of that was ever in vain. Without you, who knows where our country would be. Is the USA perfect? Heck no. Is it still the best thing going? 100%, without a doubt. That's because of you. Thank you.

On a completely unrelated note, how much is the White House worth?

Also, is it cold outside, baby? Today’s Flag Finds will keep you tucked up and snuggled down for the winter months...

Right: Marco Rubio goes viral over direct question about delays in election outcomes: 'How can it take days?' (The Blaze)

Left: Mehmet Oz did something that shouldn’t be remarkable after his loss (CNN)

Left: Did Christian nationalism lose in the midterms? Sort of — but it's not going away (Salon) 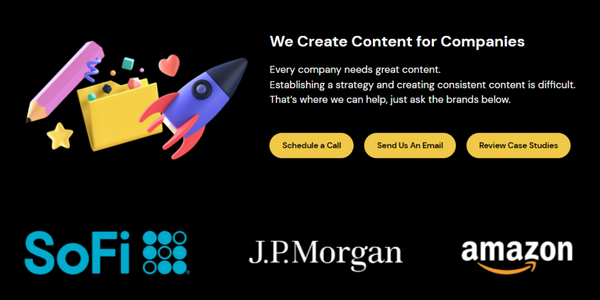 Are you content with your content? Whether you own a business, brand, Etsy shop, or social media account, you need content to compete for time and attention. But you also need time to attend to whatever it is you’re selling. Content is a catch-22. Walk-On makes it simple.

Walk-On provides accessible and accomplished content and growth services to emerging brands and household names, from Amazon to JPMorgan. Schedule a free call today and add your name to the list.

🏃 Don’t wait to be picked. Walk on to greatness.

US: Trump attacks DeSantis amid positive press: ‘An average Republican governor’ (The Hill)

World: Taliban ban women from parks and funfairs in Afghan capital (The Guardian)

US:  Arizona election results not expected until next week as trailing Kari Lake ‘100% confident’ in governor win (The Independent)

The US Senate’s balance of power remains undecided as election officials are counting thousands of ballots in Arizona and Nevada, while Georgia’s Senate race will head to a runoff election in early December.

Reporting from the Left: Senate control could hinge on two states with prominent election deniers (CNN)

Reporting from the Right: Mitch McConnell's Days As Senate Leader May Be Numbered (Townhall)

From The Flag: While some had predicted a “red wave” heading into the midterms, the House remains undecided (although Republicans are expected to win the majority), and the Senate is up for grabs. Here’s more from both sides.

Make the GOP MAGA, and Listen to Red State Concerns

“The Triumph of The Center” Niccolo Soldo, American Greatness: “MAGA’s main task during Trump’s administration should have been to capture the GOP and repurpose the party to reflect his populist agenda. This did not happen, as the continued presence of Senator Mitch McConnell in the Senate leadership attests. MAGA has now had six whole years to take over the GOP and has utterly failed to do so… The GOP today remains the Chamber of Commerce Party, with the occasional bone thrown to social conservatives… In the Senate races, only two mattered: Peter Thiel protégés J. D. Vance in Ohio and Blake Masters in Arizona. … Of the 34 Senate races Tuesday night, only these two had anything to do with the 2016 populist rebellion against the ruling elites. Even if Masters manages to get into Senate... (having) two MAGA senators is an OK start, but the populist capture of the GOP is still a long way off.”

“A tale of two Americas” Joel Kotkin, Spiked: “This year, the red states asserted themselves as crucial to the American political map. But long-lasting elites do not give up power easily. With the Democrats holding up better than expected in the Midterms, we can expect them to place an even greater emphasis on… the purposeful destruction of America’s huge fossil-fuel industry. This may play well in Malibu or Manhattan, but manufacturing and growing areas need abundant and affordable energy to grow. This growing conflict played a major role in Democrat Tim Ryan’s loss… to GOP Senate candidate JD Vance. Vance succeeded in part by highlighting Ryan’s embrace of the anti-fossil-fuel Green New Deal. Biden’s statement at a New York rally last week, calling for a ban on fossil fuels, could not have come at a worse time. We can expect the battle over climate policy to become more intense as the Democrats push their agenda on the rest of a mainly reluctant country.”

One more opinion piece from the Right: The Crime Backlash Mostly Failed To Materialize on Election Night C.J. Ciaramella, Reason

How a Red Wave Was Avoided: Abortion, and the “Big Lie”

“Why the 2022 election was such a disaster for Trump” Aaron Blake, Washington Post: “As in recent days, Trump was focused two years ago on himself during the runoffs in Georgia — specifically, with a far-flung attempt to overturn his election loss. While he perhaps views those baseless claims as legitimate, even Trump himself acknowledged last year that Georgia Republicans didn’t want to vote because they didn’t trust the process. Today, consider his favored candidates, who had won primaries in each of the four key Senate toss-ups: At least three of the four carried notable image problems into the general election, in potentially decisive ways. One of the them lost what had appeared to be a very winnable race Tuesday: Pennsylvania’s Mehmet Oz, who probably would have lost his narrow primary without Trump’s help. Now the GOP depends on both Blake Masters in Arizona and Herschel Walker in Georgia — both candidates who brought significant baggage, in different ways.”

“Phew, there wasn't a red wave. But it's too soon to exhale” Editorial Board, Los Angeles Times: “Contrary to historical precedent, there was no ‘shellacking’ of the president’s party… (and) voters wisely rejected many of the extremist Republicans endorsed by former President Trump for powerful posts in swing states. … In Pennsylvania, voters sent Democrats John Fetterman to the US Senate… rejecting GOP TV personality Dr. Mehmet Oz… But (and you knew there was a ‘but’)… Control of the US Senate may not be known until next month because of close races in Nevada and Arizona, and Georgia is heading to a Dec. 6 runoff between Democratic Sen. Raphael Warnock and Republican challenger Herschel Walker. … This election offers some signs that Trump’s influence on American politics is waning, but his toxic legacy remains enmeshed in our nation’s governance. It’s scary to think about how that power could still be exploited to determine who wins the presidency in 2024.”

Voting Trends in the Keystone and Buckeye States

Exit polling conducted Tuesday found voters who valued “honesty and integrity” tended to support Democrat John Fetterman for Senate in PA, while Republican Dr. Mehmet Oz was backed by voters who most prioritized a “candidate sharing their values.”

In Ohio, around 6 in every 10 rural and suburban voters backed Republican J.D. Vance for Senate over the incumbent Democrat Tim Ryan. The same number held true for White and male voters (CNN/Edison Research).

🛏 Did you make your bed today? Don’t worry. We didn’t either. It’s not exactly easy on the back. But it doesn’t need to be a weight on your shoulders. Here’s an ergonomic, American-made tool to help you accomplish the first task of the day, every day. Make your bed in the morning. Sleep better tonight.

⛄ Stop splurging on gas bills and heated floors. Here’s a luxury more than a few can afford. A snug pair of house slippers will keep you happy and warm all winter. And it’s hard to do better than these felted wool Nootkas. Wherever you go, take the warmth with you.

🤗 Pendleton (noun): a cozy, wool hug. Don’t check the Scrabble dictionary — just trust us. The century-old, family-owned company is synonymous with comfort for a reason. These throw blankets will remind you why. Get comfortable. 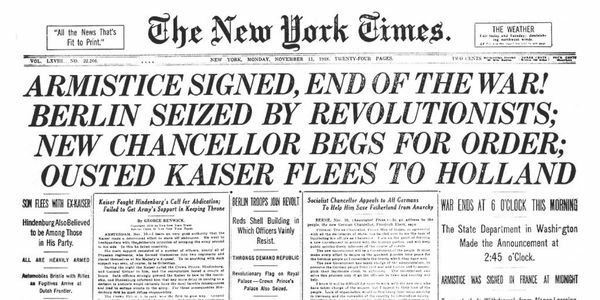 At the 11th hour on the 11th day of the 11th month of 1918, the Great War ended. At 5 am that morning, Germany, bereft of manpower and supplies and faced with imminent invasion, signed an armistice agreement with the Allies in a railroad car outside Compiégne, France.

The Conversation: Surprising Ways to Beat Anxiety and Become Mentally Strong–According to Science

Today I Learned The fate of the Mayflower remains unknown. However, some historians argue that it was scrapped for its timber, then used to construct a barn in Jordans, England.