Good morning, and happy Tuesday! This giant fish is helping to save the Amazon Rainforest…

Plus, even if it looks tasty, the National Park Service is warning against doing this…

Also, the days might be getting darker. But today’s Flag Find will light your way — through the power of 300 lumens.

Right: Top Democrats Admit Party Is Too Extreme, Out-Of-Touch With What Voters Care About (Daily Wire)

Right: Tim Ryan brags about his gun skills in new ad — while many gun owners wince (The Blaze)

Left: From Karl Rove to the Big Lie: GOP loves to claim victory when they feel insecure (Salon)

Take a Deep Breath, and Relax - You Deserve It

Relaxing doesn’t need to be rocket science. Apollo is a tracker that goes galaxies beyond just fitness. It provides safe, scientific touch therapy, calibrated to your nervous system, as a constant reminder that you are in control.

Powered by space age Apollo Neuro™ tech, the Apollo band becomes more effective the longer you wear it, as it adapts to your body’s patterns to build better sleep and focus. Also, it’s 10% off when you order through The Flag.

🚀 Take your relaxation to infinity and beyond

US: Elon Musk: 'I recommend voting for a Republican Congress' (Fox News)

US: Pennsylvanians scurry to fix mail-in ballots after ruling (AP)

US: Pelosi details when she first learned of attack on husband (The Hill) 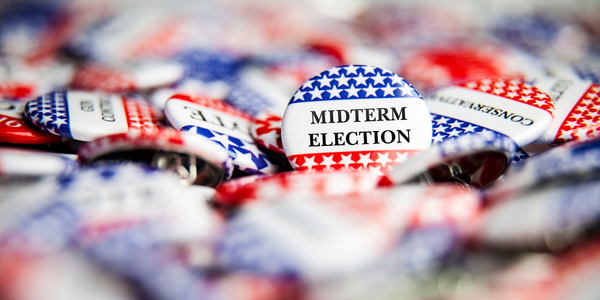 It’s Election Day as US voters head to the polls for the 2022 midterms that will determine which party controls Congress and several state governors among other local races. Democrats currently hold a majority in the House of Representatives and Senate. Polling data suggests a tight race that could see Democrats hold that majority, or potentially lose one or both chambers of Congress.

Reporting from the Right: What to Expect on Tuesday (American Greatness)

Reporting from the Left: Biden fights to stop midterms defeat as Republicans poised for sweeping gains (The Guardian)

From The Flag: We’ve been covering the midterms in depth, including key contests, such as the Senate races in Pennsylvania and Georgia. The balance of power in Congress will significantly impact the remaining two years of President Biden’s term. Here’s more from both sides.

Democrats Hold on to Hope, and Fight Against the Big Lie

“Some Democrats are growing glum, but will the 2022 midterm election bring a November surprise?” Melanie Mason, Seema Mehta, Los Angeles Times: “In one sense, the fundamentals of this election season have remained remarkably consistent. President Biden’s approval ratings languish in the low 40s. High inflation stubbornly persists. … And odds have stayed stacked against the sitting president’s party. In another sense, nothing about this moment feels predictable. The cycle has been bookended by two acts of political violence — the Jan. 6, 2021, siege of the U.S. Capitol and the assault on House Speaker Nancy Pelosi’s husband — that underscore the country’s jittery mood. … The GOP advantage has been uneven across 435 House races, 34 Senate contests, 36 gubernatorial elections and scores of other state and local campaigns, according to recent polling and early-voting data. That gives some Democrats a glimmer of optimism that they may stave off their worst-case losses in the House and keep their narrow edge in the Senate.”

“Dancing Near the Edge of a Lost Democracy” Charles M. Blow, New York Times Opinion: “Republicans have turned doubt about the 2020 election… into a test of faith. It is the crucible through which one must pass to be a modern Republican in good standing. … This mass delusion will not be easy to dislodge. … Faith and doubt linger like the ghosts of a lost soul. … This is natural. This is human. But this is a problem for our democracy. The people fighting to save democracy are doing so with fact, but the people willing and working to destroy it are operating on a feeling. … This is Trump’s twisted legacy, something that will endure no matter what happens during these midterms and whether he runs once more for president. The damage he has done and continues to do will, in the end, be far bigger than he ever was.”

The GOP Props Up New Faces In Fight Against Fake News

“GOP Outsiders Dominate the 2022 Midterms” Gregg Opelka, Wall Street Journal Op-ed: “If the ‘red wave’ of recent predictions comes to fruition on Tuesday, the 2022 midterms should be called the Inside-Out Election, because Republicans will have put so many outsiders in and turned so many insiders out. I’m old enough to remember the Beatles appearing on “The Ed Sullivan Show” and I can’t remember an election in which so many political newcomers had a serious shot at taking out established politicians of the opposite party. Here’s the short list among the Senate races: J.D. Vance in Ohio, Herschel Walker in Georgia, Mehmet Oz in Pennsylvania, Blake Masters in Arizona, Don Bolduc in New Hampshire, Joe O’Dea in Colorado and Tiffany Smiley in Washington. They are, respectively, a venture capitalist/author, an ex-football star, a doctor/television celebrity, another venture capitalist, a retired Army general, a construction company CEO and a nurse. They’re all complete outsiders with no political experience.”

“Vote for Republicans and Against Fake News” Frank Miele, Real Clear Politics: “... what I would like to write today is a column about the irrationality of voting for a Democrat… (after) their party has run into the ground in less than two years. That would be such an easy column to write. … Start with inflation. … Move from the economy to crime. Then immigration. COVID lockdowns. … Yet somewhere close to half the people will vote for Democrats… How could they be so out of touch? The answer is simple. These voters are not to blame. They are the victims of a conspiracy so broad that it blends into the background, comforting and as comfortable as a well-worn shoe. Namely, the partnership between the news media and the Democratic Party to vilify all things Republican. Of course, Joe Biden is doing his best to imitate ‘Uncle Joe’ Stalin, with his speeches excoriating free elections and free thought, but he couldn’t do it alone.”

The Abortion Argument and Women’s Vote

The right to an abortion has been a main focus of Democrats throughout the campaign season, especially after the Supreme Court overturned Roe v. Wade in Dobbs v. Jackson Women’s Health Organization.

But just 14% listed that as their top issue heading into today’s vote, compared to 49% who said it was either the economy or inflation (ABC News/Ipsos).

A separate poll found white, suburban women (who account for 1 in every 5 voters) favor Republicans by 15% in congressional races. In August the same group backed Democrats by 12% (Wall Street Journal).

🐻 Are you ready to hibernate? There’s no better way to tuck in than with these Eddie Bauer flannel sheets. 100% made from the most classic of cozy fabrics, they’re even printed with adorable bears, because metaphors work better when they’re also literal. Get your beauty rest.

🦃 Put your patriotism on parade. Macy’s Thanksgiving Day Parade may still be a few weeks away, but you can turn your backyard into a float today with this inflatable patriotic, pilgrim-hat-wearing turkey. Who said you can’t decorate your lawn for Thanksgiving? Go ahead. Be a turkey.

🔦 The dark doesn’t have to be scary. But it is when your flashlight dies on 20% charge, leaks battery acid, or starts to flicker just as you step out to check on the strange noise coming from the backyard. Fully rechargeable, made of rugged aluminum, and capable of producing up to 1000 lumens, Streamlight is for the fearless. Light your way. 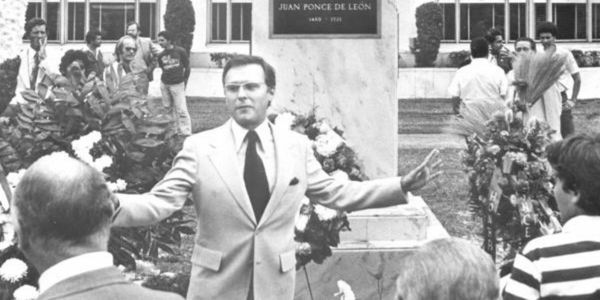 On November 8, 1973, Maurice Ferré was elected Mayor of Miami, Florida. In addition to becoming the first Puerto Rican to lead a major city in the mainland United States, and the first Hispanic Mayor of Miami, Ferré is credited with transforming Miami from a tourist town into an international city. Above is a photograph of Ferré taken in front of Miami's Bayfront Park Main Library.

Outside: 4 Laws of Muscle

The Guardian: Almonds Are Out. Dairy Is a Disaster. So What Milk Should We Drink?

Today I Learned the average cumulus cloud weighs about 1.1 million pounds or 500,000 kilograms. That's about the same as 40 school buses.