Also, if you wish all news could be as no-nonsense as this, you'll want to check out a newsletter loved by millions, called 1440.

Right: READ IT: The Letter That Greg Abbott Handed To Biden During Visit To U.S. Border, Daily Wire News

Right: 'Pure garbage': Scientific American gets blitzed for exploiting Damar Hamlin's injury as a way to label the NFL as racist Paul Sacca, The Blaze

Left: Call it the Conspiracy Theory Congress: Things are about to get dangerously weird on Capitol Hill Amanda Marcotte, Salon

Left: Why Every Photo of Jair Bolsonaro Has the Internet Peeing Its Pants Ben Mathis-Lilley, Slate 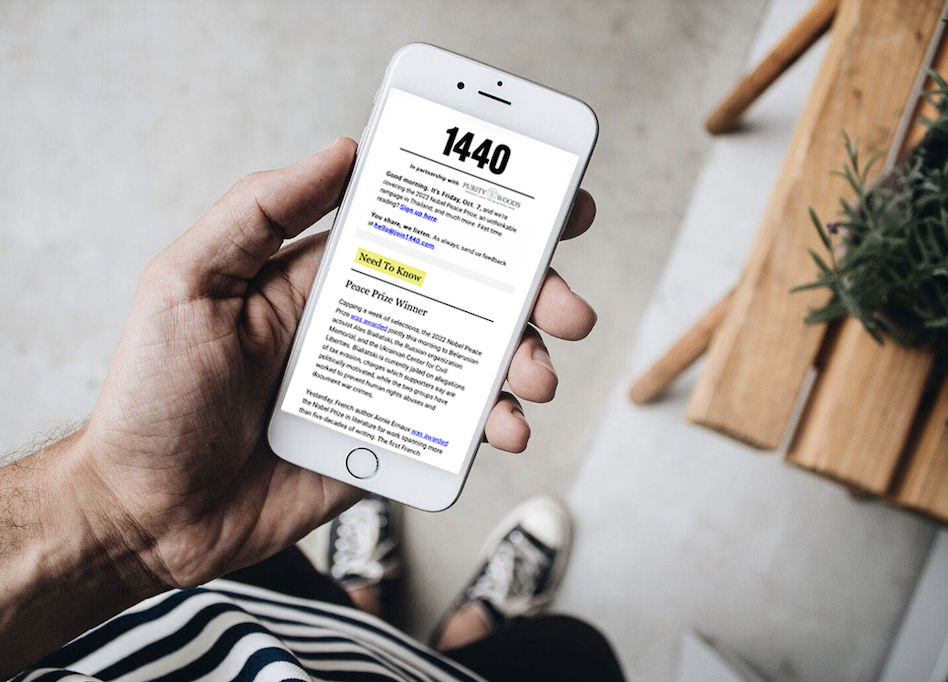 If you wish all news could be as no-nonsense as this, you'll want to check out a newsletter loved by millions, called 1440. It's a daily digest of all the most important info in culture, science, sports, politics, business, and everything in between—and better yet, it's the fastest way to an informed and impartial point-of-view.​

The folks at 1440 scour over 100 sources every morning so you don't have to. You'll save time and start your day smarter. What more could you ask for?

​Sign up for 1440 now and get your first five-minute read this minute. It's completely free—no catches, no nonsense, and absolutely no BS.

Environment: The ozone layer is on track to recover within decades as harmful chemicals are phased out, scientists report (CNN)

US: Thousands of New York nurses go on strike (Axios) 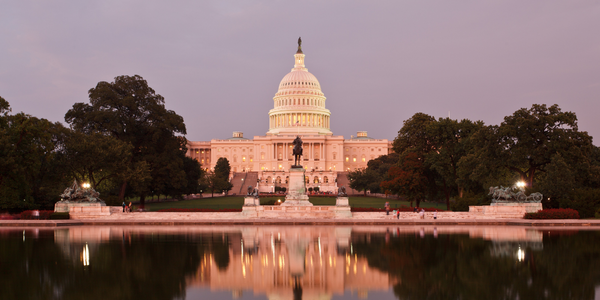 Last night the House of Representatives voted to pass the rules that will govern its business under new House Speaker Kevin McCarthy. The terms partially resulted from negotiations with some of the legislative body’s more right-leaning members, ultimately helping McCarthy secure the speaker’s gavel – which took over a dozen votes.

Reporting from the Left: Did Kevin McCarthy pay too high a price for the speaker’s gavel? (MSNBC)

From The Flag: We previously covered the protracted voting process that led to McCarthy’s election as speaker – the 55th in the history of the House of Representatives. Here’s more from both sides following the negotiations and setting of rules.

McCarthy May Have Set Himself (And Republicans) Up For Failure

“McCarthy Surrendered His Way to Victory” Charlie Dent, CNN Opinion: “The drawn-out spectacle that was the House speaker election laid bare the fracture and dysfunction within the House Republican conference. Mercifully, it ended after four days and 15 ballots. But it’s worth noting that the House speaker vote is the first – and typically the easiest – order of business. Judging by how difficult it was for Kevin McCarthy to secure the necessary votes to become speaker, there are plenty of bitter and protracted fights to come. While congratulations are in order to Speaker McCarthy, the role has been considerably weakened due to the reported concessions he made during this unseemly political shakedown. Clearly, the hard-liners exacted more than a pound of flesh from McCarthy and most of the House GOP conference that will make governing exceedingly difficult. It begs the question: Is surrendering your way to victory really winning? And when will this appeasement ever end, considering it only makes this extremist faction more powerful?”

“Speaker in Name Only” Russell Berman, New York Magazine: “Having at long last put down a rebellion from within his party, Kevin McCarthy is now House speaker. He finally has the gavel he’s long coveted, but the job he secured after 14 consecutive drubbings is not the one he envisioned. … Under the agreement McCarthy struck, any Republican will be able to demand a vote on his ouster. … He’s committing the party to pursue steep—and, in all likelihood, politically unpopular—budget cuts while ensuring a partisan brawl over the debt ceiling that could damage the nation’s economy. What transpired this week was the most prolonged stalemate to begin a new session of Congress since before the Civil War. McCarthy’s struggle to lock down the speakership illuminated just how much of a challenge any Republican would have in leading a narrow, deeply divided majority. But his capitulation to the far-right holdouts could make the House all but ungovernable.”

One more opinion piece from the Left: The Shakespearean Tragedy of Kevin McCarthy Jesus Rodriguez, POLITICO

A New Era in House Leadership, Hopefully for the Better

“It Was Absolutely Worth It” Rep. Matt Gaetz, Fox News: “We got concessions… being able to read legislation, 72 hours before its adoption, individual appropriations bills, and ultimately what we negotiated ensures that we will never again have a circumstance like this omnibus spending legislation because bills will have to comport to a single subject. There will be (requirements) on amendments, so it is going to be an open process, a transparent process… Speaker McCarthy is our Speaker and long live the Speaker. I look forward to working closely with him. But he did agree, to his great credit, to democratize power to the membership. Oftentimes these committees that agree what bills come to the floor and what the spending paradigm is, they are controlled just by people loyal to the speaker. Now what we have is a real representation of all the different viewpoints within the conference, on the Rules Committee, on the Appropriations Committee.”

“What Has Kevin McCarthy Won?” Ben Domenech, The Spectator: “The number of rules changes and side deals made along the way to please McCarthy’s conservative opponents could fundamentally undermine the job of the speakership as we know it — and concessions made to leapfrog individual members into key committee positions could have significant ramifications. Whether that leads to more conservative policymaking depends on which members you ask; many are skeptical the results will be all that different for the House GOP given their slim majority. One question we don’t know the answer to yet, and won’t know for some time, is how permanent these negotiated changes will be. Proponents made a heavy push for the idea that these shifts were necessary to take on ‘the Swamp.’ But the next Congress does not need to retain these rule changes; nor is any new speaker obliged to honor any of the handshake obligations McCarthy made to get this job.”

One more opinion piece from the Right: McCarthy Is No Pelosi - and That's a Good Thing Jonathan Turley, The Hill

Polling data from last week shows the majority (55%) disapprove of the speaker election process, compared with those who do approve (45%).

Republican respondents were more likely to say they approved at 64%, compared to 34% who said the opposite (CBS News/YouGov).

🗞️ We’re supporters of unbiased news coverage – which is increasingly hard to find these days. The team at 1440 delivers facts without motives. They scour over 100 news sources so you don’t have to, covering culture, science, sports, politics, business, and more in a single newsletter that takes just five minutes to read. It’s the news in as unbiased a fashion as humanly possible.

👂 Convenient and affordable therapy with BetterHelp anytime, anywhere. Help us match you with the right therapist, in a convenient format that charges a low flat fee for unlimited access. Do it on your own time, at your own pace. Thousands have benefited (check the reviews!). Get 25% off your first month at BetterHelp.

🖥️ Here’s a mobile device management system you can use without needing help from IT. Jamf Now is cloud-based, easy to set up, and affordable. It’s also fully secure, and lets you automate the MDM process, with certain apps and restrictions loaded automatically. Manage up to 3 items for free so you can experience the Jamf Now difference. 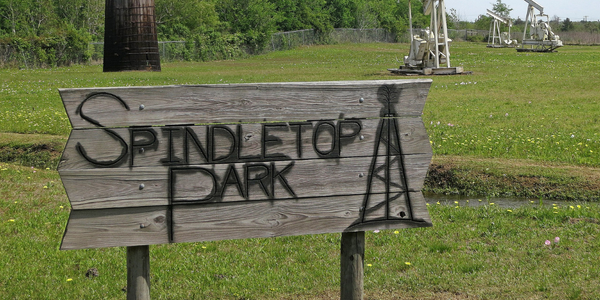 On January 10, 1901, a drilling derrick at Spindletop Hill near Beaumont, Texas, produces an enormous gusher of crude oil, coating the landscape for hundreds of feet and signaling the advent of the American oil industry.

Smithsonian: Can Scientists Save the World’s Tiniest Rabbit?

Grid News: Is football really the most dangerous sport?

Today I Learned Pluto hasn't completed an orbit around the sun since its discovery. Pluto's orbit takes about 248 years, and Pluto was discovered in 1930.